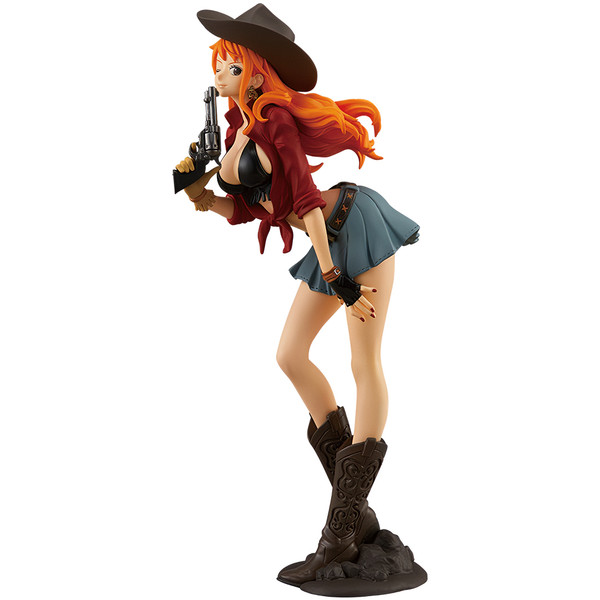 This Nami figure is released by Banpresto in their Treasure Cruise World Journey x One Piece statue figurine series.

This brand new series from Banpresto takes Monkey D. Luffy and his friends & foes to a world journey for a treasure hunt! The first wave features fans favorite One Piece character in a classic cowboy outfit.

"Cat Burglar" Nami is a pirate and the navigator of the Straw Hat Pirates. She was the third member of the crew and the second to join, doing so during the Orange Town Arc. Later, she left and betrayed the crew during the Baratie Arc, but rejoined at the end of the Arlong Park Arc, after her past and true intentions were revealed. Nami is a slim young woman of average height, with orange hair and light brown eyes. Many people consider her to be very attractive or even beautiful. She has a black tattoo (blue in the anime.) on her left shoulder, which represents mikan, and pinwheels (a homage to Bell-mère, Nojiko, and Genzo, respectively), where she used to have a tattoo for being a member of Arlong's crew.