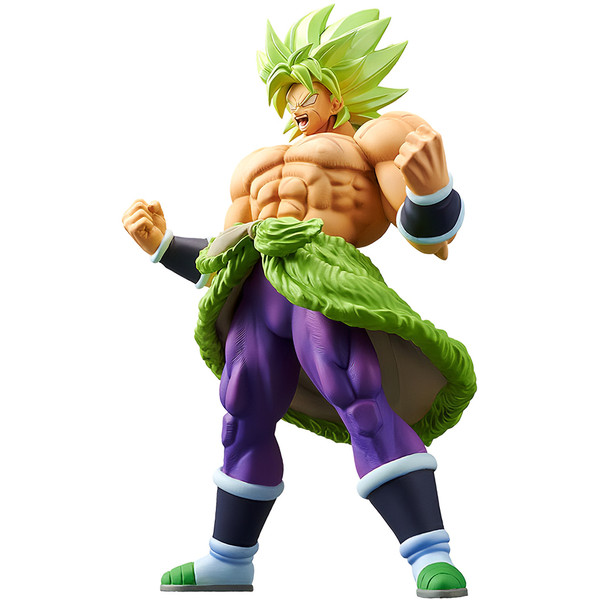 This Broly figure is released by Banpresto in their Cyokoku Buyuden x DragonBall statue figurine series.

The Cyokoku Buyuden product line from Banpresto aims to create a series of fixed pose figures with superior and fine textures that were reminiscent of animation and original lines in shaded areas from the anime movie "DragonBall Super: Broly".

The new version of Broly appears as the main antagonist in the film Dragon Ball Super: Broly (2018), in which he encounters Goku and Vegeta before he meets Frieza and Whis for the first time. Broly's storyline is rebooted for the film. He is here portrayed as an abnormally powerful Saiyan who is exiled to the wasteland planet Vampa by King Vegeta out of jealousy of his power. Broly spends the next several decades living in exile with his father Paragus until they are rescued by the Frieza Force soldiers Cheelai and Lemo, who quickly befriend him. Paragus uses Broly as a weapon of revenge against King Vegeta through his son Vegeta but is killed by Frieza in order to provoke Broly into becoming a powerful Legendary Super Saiyan. In this form, he is able to defeat Goku and Vegeta in their Super Saiyan Blue forms, forcing them to retreat and fuse, leaving Frieza to face Broly on his own. Ultimately, Gogeta easily defeats Broly, but Cheelai and Lemo manage to use the Dragon Balls to transport him back to Vampa before Gogeta can finish off Broly. Cheelai and Lemo settle down with Broly, who redeems himself, but are visited by Goku, who brings the group supplies and begins a friendship with Broly.