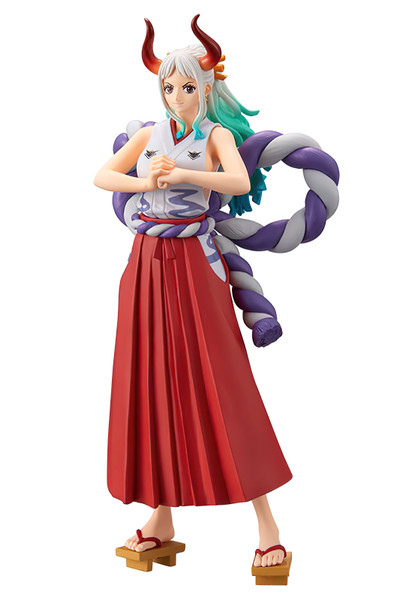 This Yamato figure is released by Banpresto in their DXF The Grandline Lady x One Piece statue figurine series.

Banpresto's DXF series features high-detailed, collectible STATIC figurines meticulously sculpted with uniform series scale from the popular anime series. The DXF figures could only be found in Japan's UFO Catcher games, and are difficult to get the exact figure you want.

Yamato (ヤマト) is the child of Kaidou. Born as Kaidou's daughter and groomed from a young age to be his heir, Yamato instead developed a profound admiration for the samurai Kozuki Oden. After his death, Yamato chose to become Oden, impersonating him and adopting his mannerisms. As a result of this desire to become Oden, Yamato decided to become male and identify as Kaidou's "son", and Kaidou and his crew refer to him as such as well.

This path has put Yamato at odds with Kaidou, with much of his life being spent imprisoned on Onigashima. Yamato befriended Portgas D. Ace during his visit to Wano Country, and after learning of Ace's death waited for the arrival of his sworn brother, Monkey D. Luffy. Together with Luffy and the Ninja-Pirate-Mink-Samurai Alliance, Yamato helped defeat Kaidou and the Beasts Pirates, and now intends to join Luffy's crew upon their departure from Wano Country.