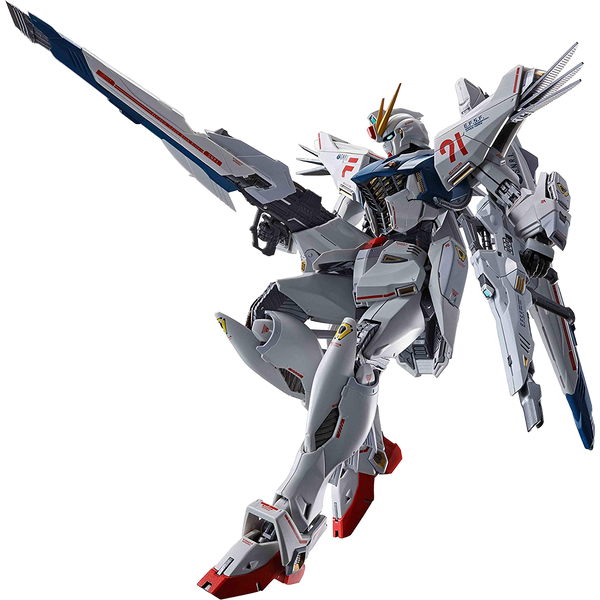 The Gundam Metal Build series is a line of action figures from Bandai that come with extreme detail and articulation plus diecast metal parts. Building on technology cultivated in the Gundam Fix Figuration Metal Composite series, Bandai put its experience into creating the Metal Build line.

From "Mobile Suit Gundam F91" comes a novel design that foreshadowed the arrival of a new generation, the Gundam F91 is now available in a special version. From the 2017 edition, the body coloration and markings have been rebuilt based on matte pearl, reminiscent of the impressions of that time. Also changed some of the top parts and movable fin structure of the shoulders, to emphasize the flowing silhouette specifications. This is the definitive product with optional parts equipped with the MSV. The 30th anniversary edition of METAL BUILD Gundam F91 has been revived in a new interpretation of ideas and gimmicks created by the mechanic designer Kunio Okawara himself. The base color of the figure is white matte pearl, and the whole body has been redesigned to reflect the image of the movie. A special sleeve is included illustrated by Kunio Okawara.Set includes figure, exchangeable head, exchangeable face parts, exchangeable wrists (4 left, 4 right), Vesper right and left, beam rifle, beam launcher, beam shield, beam.launcher, beam sabers x 2, set of base, exchangeable shoulder armors (left and right), powered weapons, twin vespers set, Vesper joint cap.